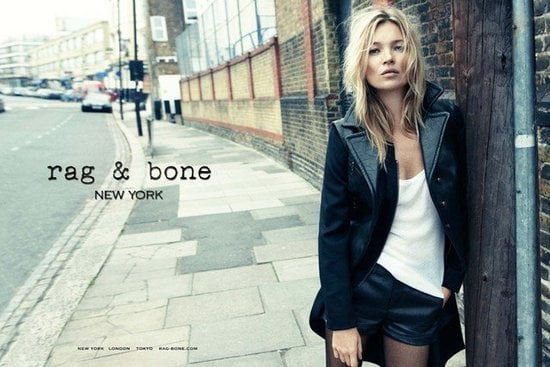 It's a match made in heaven with perfect timing — Rag & Bone's British designers David Neville and Marcus Wainwright have released their first-ever ad campaign and have brought in the big guns with Kate Moss. The seriously cool brand timed the release of the ad just right too, as their first European store opens in London's Chelsea today. Ms Moss embodies the label's ethos so it's unsurprising she looks at home dressed in leather, hot pants and fishnets for the campaign, which was shot in Kentish Town by Craig McDean. Wainwright told WWD: "It was just them on a derelict London street — Kate with minimal makeup and Craig with a handheld camera and natural light." Rag & Bone will also be showing at London Fashion Week this September, and the long-awaited campaign will appear in the September issues of Vogue, Vanity Fair, The Paris Review, and more. Are you excited to see Rag & Bone in London?