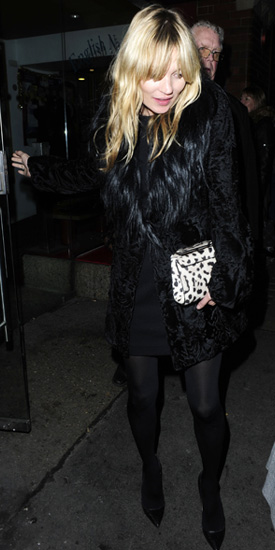 Kate Moss has been speaking to Company magazine for their January 2011 issue about her future role in modeling.

The British model admitted she was surprised her career had lasted this long. "I did my first photo shoot at 16 and I thought that was it! I just really enjoy creating images and working with creative people. I love the whole process. So, for as long as I enjoy it, I’ll still do it. And as long as I’m still getting booked!"

She also confessed to being a fan of Britain's Next Top Model! Kate says she often watches the show and wonders what they're doing to the girls. "In BNTM, they put the contestants through the torture of what modelling can be like. And it honestly can be really humiliating. I mean I’ve done crazy things – I’ve been in a bikini in minus -30 temperatures and you have to keep going until you get the shot. But that’s me – I will always keep going until I get the shot.”

She stresses that it's not as glamorous as it might seem. "Girls interested in modelling need to realise that its hard work. You can go to a shoot in the morning and not even start shooting until 10pm – and still be there at 5am the next day."

When asked about sharing her talents she said,


“I think I could definitely open a modelling school. Kate’s Modelling School? Moss’s Models? Put Moss’s Models down! [Laughs] You need to see it as a skill. I mean, you can be the most intelligent person in the world, but it won’t make you a good teacher. I’m very short and I’m completely lopsided – I’m not like those perfect, gorgeous Amazonian Brazilians. But if you learn how to work it, then that’s it!”

I don't doubt that a Kate Moss model school would be incredibly popular. Would you like to see her sharing her talents and insider knowledge with the world?