Kate Moss had us all wondering what she was up to earlier this week when she was spotted shooting an ad campaign in Paris' Place de la Concorde. Initially it was assumed that she was reclaiming her place as the face of Yves Saint Laurent as she posed in items from the Autumn '09 collection, but a spokesperson has quashed that. The flower prop has provoked suggestions that she is in fact shooting a YSL beauty campaign although that is also yet to be confirmed. As stylist Edward Enninful and photographer Craig McDean were present she could have been shooting for Vogue. Whatever she was up to, she looked great and it would be good to see her working with Stefano Pilati again.

Update: WWD have confirmed that Kate was shooting a YSL fragrance campaign. 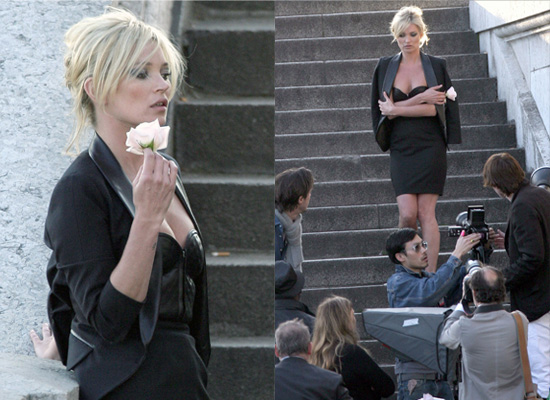