It has been revealed this morning that Alber Elbaz likes coloured pencils so much that he is to release a limited edition set! The box named “20 years of Supracolor by Alber” features a Parisian carrying Lanvin shopping bags. Supracolor’s maker, Swiss company Caran d’Ache approached Elbaz following a magazine interview which revealed them as his favourite brand. 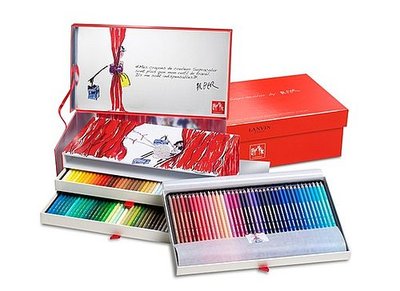 Elbaz told WWD, "My Supracolor pencils are more than a working tool. They are indispensable.” There will only be 1,988 sets available (a nod to the year they were created) from Lanvin's Paris boutique from tomorrow (25th September). Each set will contain 120 pencils and will form part of the boutiques window display for Paris Fashion Week.

Alber ElbazLanvinSimply Fab
Around The Web