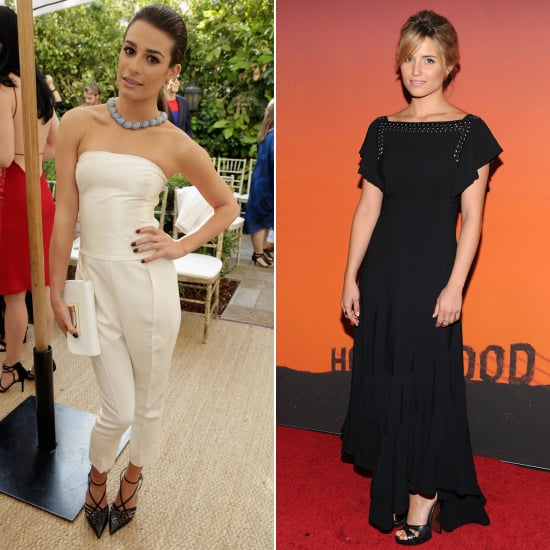 Two of Glee's leading ladies showed off their style last night at two very different fashionable events in the US. In New York, Dianna Agron attended the Whitney Museum of American Art Gala & Studio Party. The event was supported by Louis Vuitton, so it's no surprise that Dianna chose to wear the designer, opting for a '30s-style dress with flutter sleeves in classic black. Meanwhile, her former flatmate and costar Lea Michele was in LA for the CFDA and Vogue Fashion Fund Event. She tweeted that she was "having another Calvin Klein moment" (following her Women in Hollywood appearance), choosing a strapless white jumpsuit and black strappy heels. The monochrome looks couldn't be more different, except for the fact that both ladies opted for a pop of pale blue to finish the look; Lea with a chunky necklace, Dianna with dramatic pastel eyeshadow. Whose look do you love?