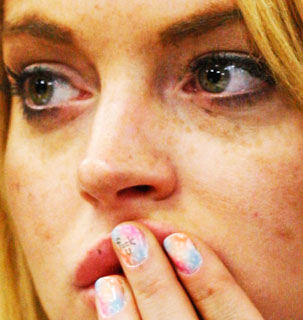 At her sentencing yesterday afternoon, Lindsay Lohan burst into tears, but her nails were conveying a very different sort of message. On top of an otherwise very cute multipastel mani, she had this rather nasty phrase scrawled, which can't have pleased the judge, bailiff, or any of the other people in court just doing their jobs. Hopefully, the whole thing was just poor thinking and lack of polish remover on Lindsay's part, and not an actual attempt to dis the justice system. Have you ever painted a message on your digits, or would you? And do you think her manicure was intentional, or not?

Nails
Ever Wondered What a True Line of Duty Fan Looks Like? This AC-12 Manicure Says It All
by Tori Crowther 3 weeks ago