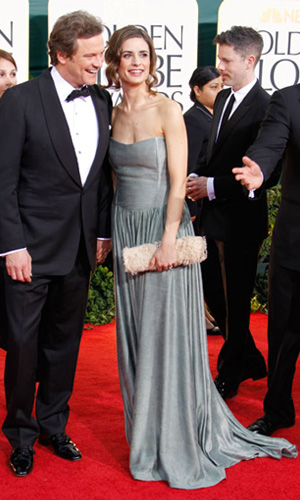 London Fashion Week kicked off today, and my second show of the day was Jeff Garner's Prophetik. The eco label has attracted a celebrity fan in Livia Firth who wore one of his designs to the Golden Globes this year. She was sitting in the front row wearing a black slogan tee which read I am Albert Woodfox and spoke to me about Prophetik, the future of eco fashion and her plans for the Oscars.

Why did you decide to wear Prophetik to the Golden Globes? I have always been a fan of Jeff and how he produces his garments, how he dyes them and his passion for sustainable fashion. Last season, when I saw his show there was a gown that he made with his silk and it was so beautiful, and I kept it in mind and then when Colin got the nomination for the Golden Globes I thought, that's the dress I wanna wear.

To find out more from Livia, just keep reading.

What do you think makes his designs so unique? He's a total individual. You know, he's so particular. What he believes and his philosophy is reflected in the garments that he makes. Usually designers go for cuts and forms and he goes for a more ethereal concept of life.

How will eco fashion develop in the future? It will become huge! Then it won't be called eco fashion anymore, there will be fashion and non ethical fashion. They will have to define themselves!

Have you decided what you're going to wear to the Oscars yet? Yes its a dress by a designer called Gary Harvey.

Stay tuned for photos of the Prophetik Autumn collection.