London Fashion Week began this morning with a bang and a change of venue. In a short speech before Paul Costelloe's show, British Fashion Council president Harold Tilman explained that from September the event will be based at Somerset House (as rumoured). He then took his place in the front row between Erin O'Connor and Hilary Riva, whilst Paul Costelloe's '60s inspired collection was presented to a packed out theatre. 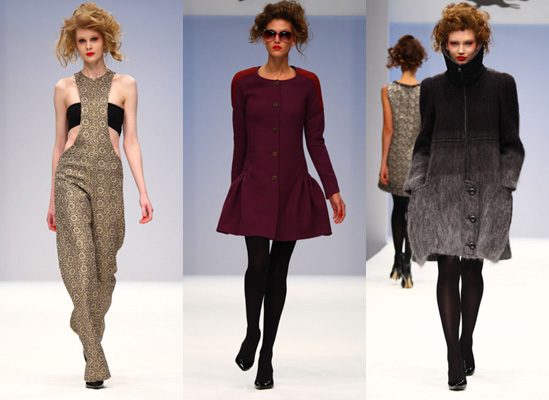 For images and further thoughts on the collection, just read more.

There was a ladylike elegance to the collection where necklines were high and hemlines short. Dresses and coats were presented in swing shapes with funnel necks, exposed chunky zips and cute pockets. Costelloe mainly drew from a palette of autumnal hues but also used a gold brocade fabric for a more dressed-up look.

He used a variety of textures which added to the style of the pieces using mohair, crepe and tweed. He cited the glamorous ladies of Park Avenue, New York as his inspiration resulting in pieces which wouldn't look out of place in Gossip Girl.

I will be commenting on the shows live all week via Twitter so if you're not already following me, do so now!