Aside from a brief stint with H&M, it seems surprising that Madonna is yet to add a clothing line to her CV. Her style has defined decades and her penchant for revealing items has become synonymous with her music videos. 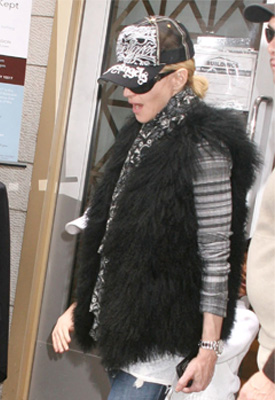 This morning it has been suggested that the Queen of pop is likely to collaborate with Christian Audigier on a fashion line. Audigier has previously been linked with the King of Pop, Michael Jackson, as rumours circled about a collaboration.

Madonna and Audigier are expected to hold a big press conference in the next few weeks to confirm the plans but for now everything is being kept under-wraps. The Mirror implied that she would work with Audigier's Ed Hardy line but he has dismissed that, “It’s a completely new project. It’s a new brand. Actually, it’s more than a brand.”

Although nobody will yet confirm the collaboration Audigier told WWD, “I’m preparing a huge deal." The mind boggles as to what the line would include. She is a fan of Ed Hardy baseball caps (she is pictured this weekend sporting one) and is rarely seen on stage without fishnets!

Netflix
Who Is Jessie Mei Li? Here's What You Need to Know About the Shadow and Bone Star
by Navi Ahluwalia 3 weeks ago