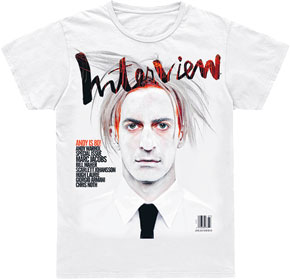 Seems Marc Jacobs dreams come true on Thursday with the release of the latest Interview magazine featuring Marc as Warhol on the cover. Marc appears with a white mop of hair, crisp button-down shirt and tie. Similarities have been drawn between the designer and the artist due to the business nature with which they approached their work. Interview's Glenn O'Brien, told WWD, "Andy was always talking about how new art is business art," O'Brien said.

Marc isn't fully convinced by the similarities, "I don't think of myself that way. Warhol is Warhol. He's practically a god. I thought, 'I'm going to get a lot of hell for this.'" To mark the launch of the magazine T-shirts ($35) and tote bags ($15) imprinted with his cover shot will be available from his Bleecker Street store raising money for the Andy Warhol Museum in Pittsburgh.