Marc Jacobs presented his main line collection on Sunday to much applause as he took influence once more from Stephen Sprouse. Yesterday he presented his diffusion line, Marc by Marc Jacobs before he heads to Paris for the Louis Vuitton collection. For his younger line Marc took inspiration from the recent weather both in Europe and on the East coast of the US as we struggle to dress for sub-zero temperatures. His cosy line included cute snow ankle boots, thick tights and plenty of layers with waists clinched with thick leather belts. 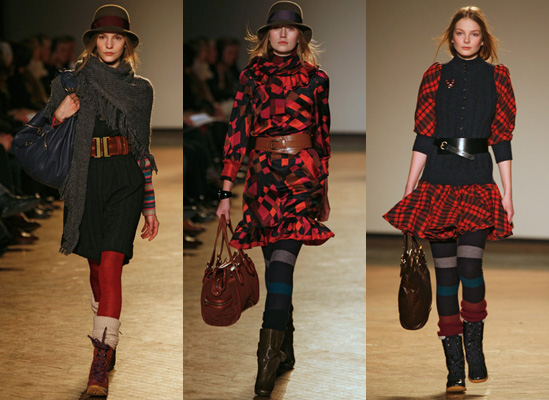 For more thoughts on the collection and images, just read more.

There were clashing prints with plaid and stripes dominating the pieces. The line had folk undertones with cable knit, knee length skirts and shawls. Accessories were key with chunky knit socks, scarves, ladylike felt hats and statement belts. Handbags were plain and unremarkable as we move away from "it-bags" and in to understated arm candy.

No celebrities were in attendance at the show and the looks created were very casual, and thrown together yet stylish. It was an incredibly wearable line, particularly when you dissect the individual items. Compared to previous Marc by Marc Jacobs lines, it felt much more Dawsons Creek than Gossip Girl.