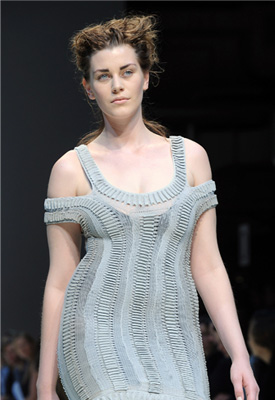 Mark Fast quickly became a household name during London Fashion Week when he controversially decided to use size 14 models as part of his catwalk show. The decision clearly caught the eye of Topshop who are rumoured to be in discussion about a capsule collection.

Apparently, the designer will create pieces to hit stores in February. A Topshop spokesperson told Grazia "Topshop has always thought Mark is a very inspiring designer, and we supported him with NEWGEN (a Topshop sponsorship award to show at LFW). He has been on the radar for quite a while."

Mark graduated from Central Saint Martins in 2008 and his designs have since been worn by Rosie Huntington Whiteley, and Cassie. I wonder how he would adapt his designs for a mainstream audience?