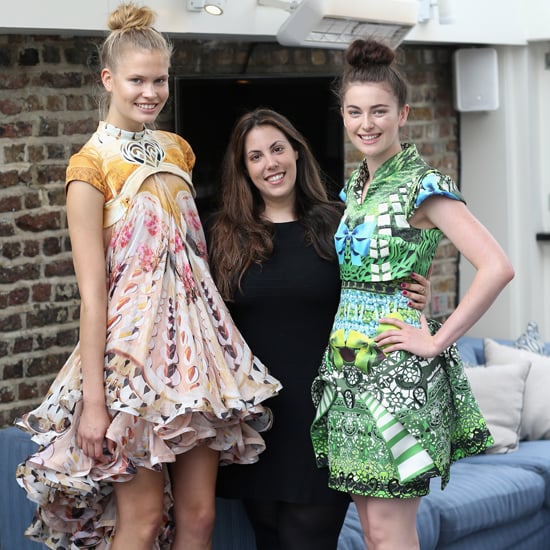 Yesterday in London, Mary Katrantzou posed with two models wearing her designs for the announcement that she and Vodafone have entered a two-season partnership across Spring/Summer 2013 and Autumn/Winter 2013. Their collaboration will start at the British Fashion Awards Emerging Talent Award winner's London Fashion Week show in September, and will offer fans the chance to meet the designer backstage. The phone company's front row mobile phone recharging units will also return to the BFC show space and Somerset House.

Vodafone's previous LFW partnerships with Richard Nicoll and Christopher Kane combined fashion and technology. Kane remade a fleet of taxis in his galaxy print complete with mobile charging units in May 2011, while Nicoll introduced his white leather handbag with phone recharging capability this February. At the launch, Katrantzou told Elle UK: "It won’t be a phone dress, but it will be something that really fuses fashion and technology." I'm really excited see her project in February 2013 at her AW13 show, what about you?