It's pretty likely that you became aware of Mia Goth from her recent unofficial Vegas wedding to Shia LaBeouf, but it wouldn't be fair to pin this British actress and model down as just a wife — she's much the opposite. Signed to Storm Models and with films like Lars Von Trier's Nymphomaniac: Vol. II under her belt, there's no doubt that Goth has some serious talent. And as you may have noticed from the live stream, she has the style to match. Often spotted in Miu Miu, Louis Vuitton, and Prada, Mia plays it pretty on the red carpet in brocade dresses and Mary Janes while her off-duty is effortlessly cool.

The future looks bright for Goth starring alongside Dane DeHaan in the upcoming psychological thriller A Cure For Wellness. Other projects include Suspiria, the tale of a ballet dancer discovering a sinister secret, with a female cast boasting Chloë Grace Moretz, Dakota Johnson, and Tilda Swinton and High Life opposite Robert Pattinson and Patricia Arquette slated to be released in 2018. Talk about some costars! Read on to see her most stylish sartorial moments so far. We can predict many more ahead. 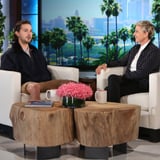