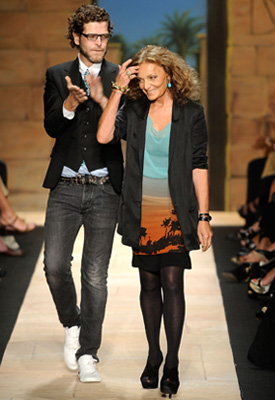 British designer Nathan Jenden has been a key part of the DVF empire since 2001 as has since been seen taking a bow with Diane von Furstenberg at every catwalk show. This morning it has been announced that he will do this for the final time this month as he departs the label to focus on his own line.

Diane explained to WWD how this influenced her Autumn '10 collection. “This show is really a celebration of Nathan and I, and of our collaboration. It’s sad because we are going apart, even though we are staying close, and exciting because he is going to do his thing and focus on it.”

She has always supported Nathan and regularly attends his catwalk shows. He commented, "These nine years have been a large part of my life. I am so proud of knowing her, and so proud of the journey we have taken together. When I first met Diane, not everybody knew her story. We have really developed the brand around Diane and her lifestyle and spirit of this woman."

He will be succeeded by Yvan Mispelaere who is most famous for working with Phoebe Philo at Chloe. He has since been working with Frida Giannini at Gucci. I am interested to see the impact of this change on the designs.