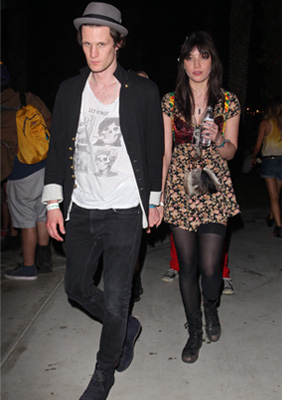 It seems a hot new couple have emerged over the weekend as Daisy Lowe and Matt Smith were spotted canoodling at Coachella festival. The model was there with fellow party girls Alexa Chung, Pixie Geldof and Florence Welch after spending some time in LA.

Matt (better known as the new Doctor Who) is in the US on a publicity tour to promote the launch of the new series. Although the pair are yet to confirm anything, Daisy hinted at it on Twitter. Matt has previously revealed his affections for the model calling her a "pretty lady".

There are rumours that the pair have been dating for several months, but kept it underwraps to avoid overshadowing his Doctor Who debut. Daisy is the face of Louis Vuitton swimwear this season. I think they make a gorgeous couple! What do you think?