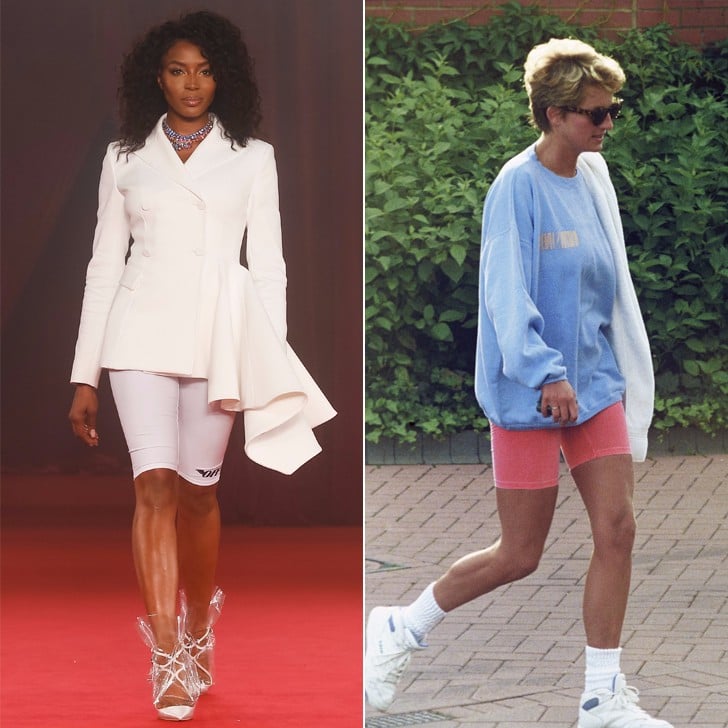 Virgil Abloh's Spring 2018 Off-White collection was highly anticipated. Days before he debuted his new line at Paris Fashion Week, the designer gave us a sneak peek at the modern-day Cinderella slippers he collaborated on with Jimmy Choo. But it turns out Cinderella was only the fictional princess Virgil wanted to pay tribute to. Most of his runway was actually devoted to Princess Diana, which came at a very fitting time, following the 20th anniversary of her death.

Many showgoers Instagrammed snaps of supermodel Naomi Campbell closing the show in cycling shorts and an elegant tailored blazer, which paid homage to both Princess Diana's off-duty wear and her occasion outfits. But Virgil's catwalk was covered in references, from his Time and People magazine clutches — Princess Diana famously featured on the cover of both publications — to a black and white blouse just like the one the late royal wore for a polo match in 1983. Read on to see every last detail, and compare some of Virgil's new clothes to the ones Princess Diana made iconic in her lifetime.