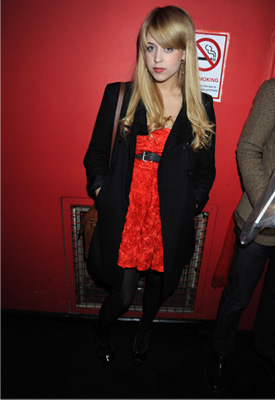 Peaches Geldof made her first foray in to fashion design this year with the launch of her capsule collection for PPQ. Most of you were impressed by her designs in the end so you'll be pleased to know that today it has been revealed that she will design a second collection for PPQ.

Her first collection was quite pricey with pieces around £100 but her next line will be slightly cheaper. Label owner Percy Parker explained, “We had a meeting to discuss expanding the range. We're going to make it a lot more accessible, in different shops around the country and on the Internet. It's going to be much more accessible, but not as cheap as Topshop.” Parker's comment might be a dig at Kate Moss for Topshop but it seems he is eager to defend Peaches.

He added, “Peaches gets a lot of bad press but that's just because if she doesn't think someone is cool, she won't make the effort or give them any time.” The new pieces will be available from March although details are yet to be finalised.

I agree that Peaches does get some bad press and I was pleasantly surprised by her designs so will be intrigued to see what she comes up with next. What do you think about her plans?