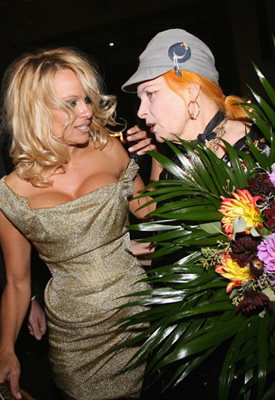 When Pamela Anderson attended Vivienne Westwood's Spring show in London in September with a mystery man, tongues started wagging. The rumour mill went in to over time before in November Pamela was confirmed as the face of Westwood's Spring campaign.

Today details of the campaign have been revealed. It was shot by Juergen Teller and stars not just Pamela but also Vivienne and her husband Andreas Kronthaler. The setting was Pamela's Malibu trailer and features items from all of Vivienne's clothing lines including Gold, Red, Anglomania and MAN.

The campaign will debut in February 2009 magazines across the world and will also be published as a coffee table book. I can't wait to see the images, what do you think of the collaboration?