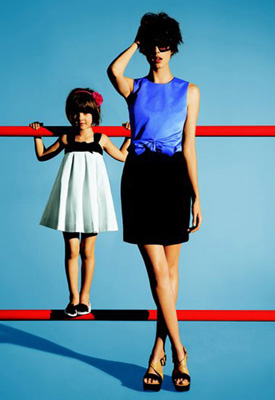 It's been a little while since we've seen Agyness Deyn. The model decamped to New York a few years ago and has since been rumoured to be following in the footsteps of Lily Cole by beginning an acting career. She did not appear on any of the Spring 2010 catwalks, but she did find time to shoot this campaign.

The latest collaboration to catch my attention is Paule Ka for La Redoute. The Spring line remains true to it's Parisian routes with '60s inspired pieces including cropped trousers, block-coloured bustier dresses and accessories. What do you think of this ad campaign? Are you interested in the pieces?