The fashion pack traveled to Paris yesterday as attention shifted from Milan to the home of couture. Gareth Pugh was one of the biggest names on the first day as he presented for the third time in the French capital. When you think of Spring, you probably imagine pastel shades and floral prints. Well, Gareth hasn't softened that much, but there was a definitely a more romantic feel to his collection than previous seasons. The colour palette was relatively dark with a lot of grey shades, but the shapes were softer. Mens and womenwear were mixed together highlighting the androgynous feel of the clothing. There were high necklines, figure hugging shapes and slashed fabric. The show came as rumours began to swirl that he is planning on launching a fast fashion line. This would mean that his pieces were more accessible, but how well would his designs translate to the masses? 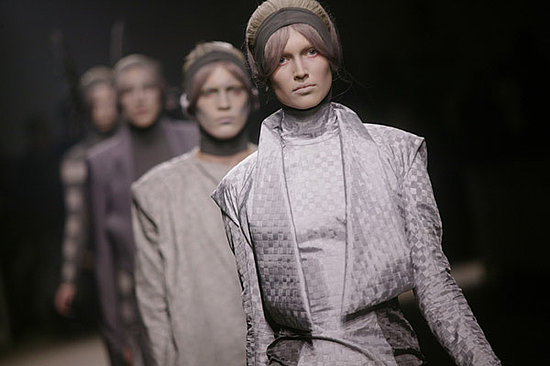 For more images from the collection, just read more.