Christian Louboutin has been on speed dial for glamorous red carpet events for several seasons. His sexy heels have adorned the feet of many leading ladies, but this season it's a key pair of his shoes which have been popular on both sides of the Atlantic. The Differa (£755) first landed on my radar when Heidi Klum wore them to the Golden Globes at the start of the year. They have since adorned the feet of Alexandra Burke, Jennifer Lopez, and Nicollette Sheridan to name a few. This weekend they appeared again forming an integral part of Megan Fox's MTV Movie Awards ensemble. The many straps on the sandals make them leg lengthening (not that these girls need that) and the chunky platform makes the heel manageable, what do you make of Louboutin's latest craze? 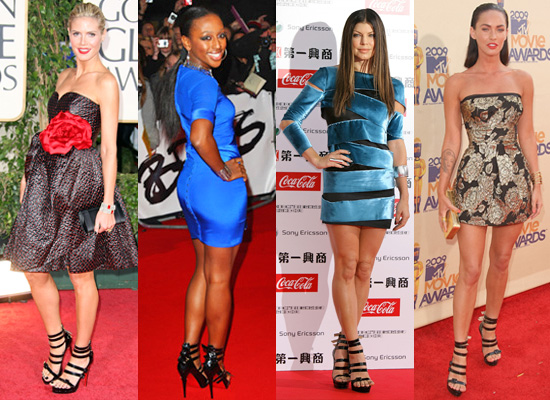