The '70s vibe continued on day two as the House of Holland Spring show took place. The collection was colourful with a distinct Studio 54 feeling. There were metallics and a fun banana leaf print adorning flares, jumpsuits and hot pants. I asked Henry why he thought so many designers were reviving the '70s. He joked, "I don't know, I just watched Xanadu on a plane!" The collection felt much more grown up, like the HOH girl was attending better parties. 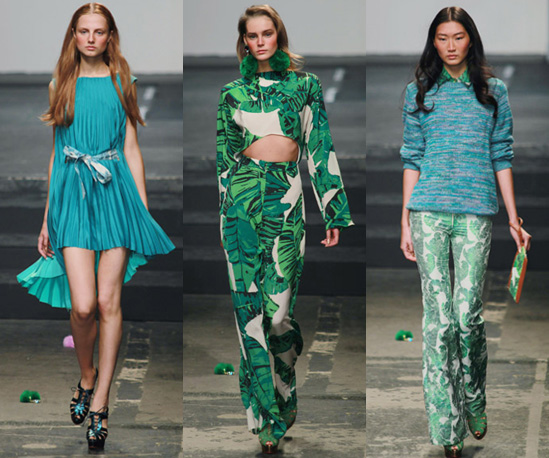 He wanted to recreate 1970s glamour and explained, "it's cocktail dressing, but with a young, fresh edge. It's bright and colourful." The looks had fluffy accessories like belts and earrings which stood out and there were backpacks in the banana leaf print. This House of Holland collection was my favourite by the designer. It really felt like the brand had developed. Henry told me that he'd paid "more attention to the details" and that the HOH girl had the "same personality, but is more grown up". Do you like this collection?
To see photos from the collection, just read more.