Emanuel Ungaro made a surprising decision in early September as they announced that Lindsay Lohan would be the new artistic adviser. She would work alongside chief designer Estrella Archs and they have been busy ever since putting the Spring collection together. The move was aimed at reviving the label and creating a younger vibe at the French fashion house, and they certainly achieved that. The line was shown yesterday as part of Paris Fashion Week and included some appealing minidresses. However, the fashion industry were not impressed, with Sarah Mower describing it as "a bad joke of a fashion show" and Fabion Baron bluntly stating, "We love Lindsay Lohan — as an actress. Period." Celebrity clothing lines definitely have their appeal and their place, but when they're charging over £1,000 for a dress, you would probably expect more technical knowledge. What do you think of the Spring line? 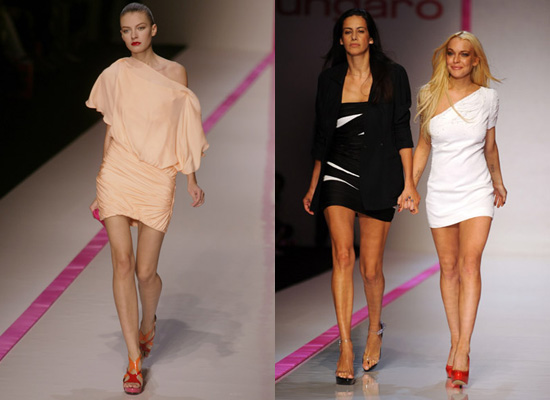 To see more images from the show, just read more.