It feels like the first day of term today as the fashion pack heads down to Somerset House for the Spring 2011 shows at London Fashion Week. Proceedings were kicked off, as always, with Paul Costelloe who created a Hawaiian themed Summer collection. The Irish designer used pastel shades on '60s inspired mini dresses with skater skirts and a metallic finish. They were teamed with cute, cropped biker jackets with subtle zips and pushed up sleeves. 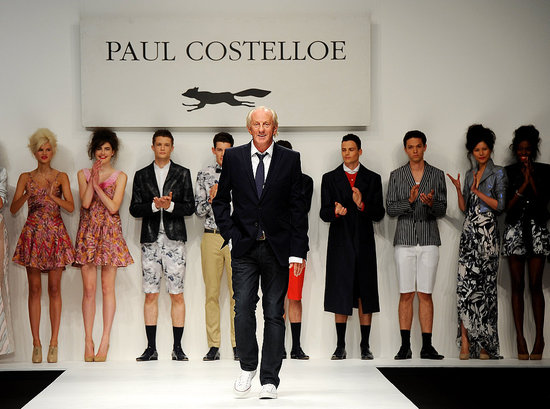 Costelloe introduced menswear last September and that continued to be a major part of the show. The biggest round of applause came when his six sons came out together modeling some of Costelloe's suits! There was a carefree feel to the collection which left me yearning for hot Summer days spent lazing around outside. There was definitely a change of pace for Costelloe who created a much younger, sexier collection than previous seasons. Stay tuned for more coverage live from the tents!