The size zero debate is never far away from the fashion world, but this year it took a new turn when certain industry figures decided to take action. Earlier this year, Katie Grand chose Beth Ditto to front the first issue of Love magazine as the singer posed naked on the cover. Then, British Vogue editor Alexandra Shulman added to the debate by blaming designers for the changing sample size. She argued that well known models now don't fit in to the pieces, "Daisy Lowe is a good example. She wouldn't fit into these samples." 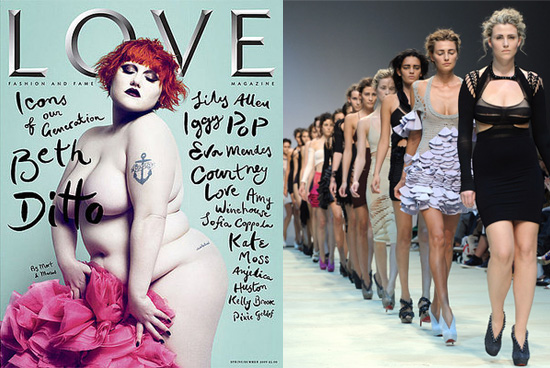 Mark Fast was the most famous designer to take note of her words and went on to use plus size models on the catwalk for Spring 2010. The move shocked those watching in London and reportedly made his stylist walk out. More recently, V Magazine have embraced the changing shape of fashion by dedicating a whole issue to plus size models. The magazine will hit newsstands in January 2010 and will include Crystal Renn, Kate Dillon, Mia Tyler and Hayley Morley (who has become famous since Fast's show). How do you feel about the changing face of fashion?