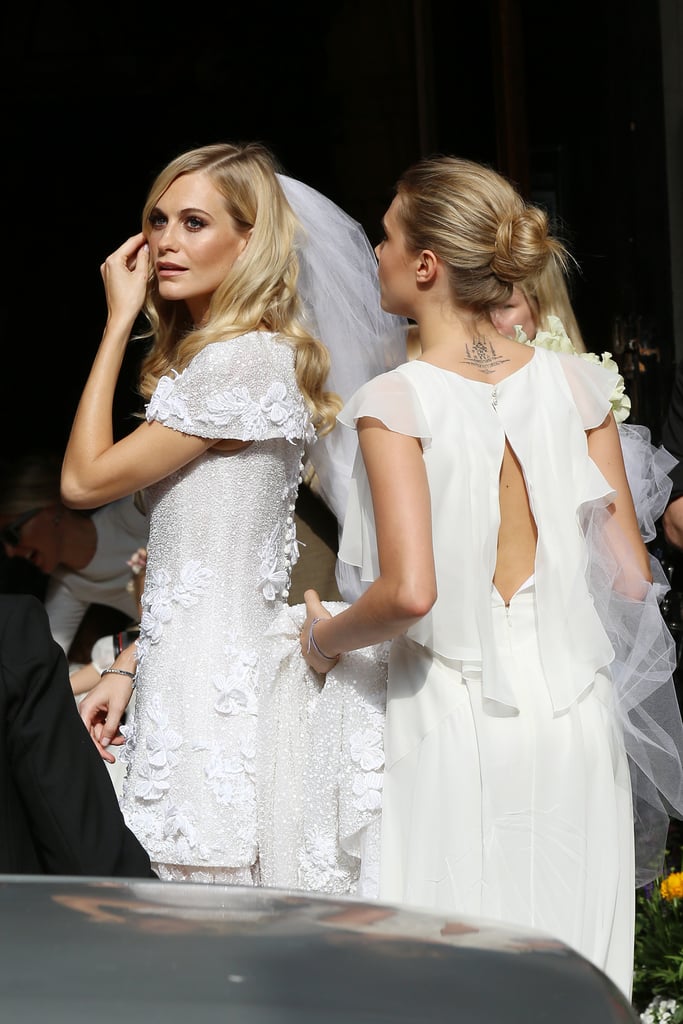 Poppy Delevingne married her longtime partner James Cook at St Paul's Church in Knightsbridge, London, on Friday. The bride looked stunning in a custom-made Chanel Haute Couture gown — the model is especially close to the brand's designer, Karl Lagerfeld — while younger sister Cara Delevingne wore an equally gorgeous white Chanel dress. Cara played the role of the doting maid of honor, holding on to Poppy's gown and helping her enter the church, and Poppy shared a sweet smooch with her brand-new husband after tying the knot. Guests at the nuptials included former Spice Girl Geri Halliwell and fashion designer Matthew Williamson, but sadly missing was Poppy's BFF Sienna Miller, who is currently filming American Sniper with Bradley Cooper in LA. It sounds like Sienna will have another chance to see her friend get hitched, though: it's been reported that Poppy is also having a ceremony later in the year in Morocco, which will be a lavish black-tie bash.

Poppy broke the news of her engagement to James last year by tweeting a photo of a bespoke red jewelery box by Anya Hindmarch with "Will you marry me?" etched on the inside. She shared photos of the gorgeous engagement ring soon after. Scroll through to see all of the beautiful photos. Congrats to the happy couple!

Celebrity Instagrams
Gwen Stefani and Blake Shelton May Be an Unlikely Pair, but Their PDA Speaks Volumes
by Britt Stephens 12 hours ago