It's officially official: Lady Gaga is the new face of Versace! After Mert Alas (part of the photographic duo who shot Gaga's campaign) posted the first campaign image on Instagram Saturday, the Italian fashion house followed suit and plastered the image across its social networks. And as they say, when it rains, it pours. A mere 24 hours later, a second image from the campaign was released while Lady Gaga appeared as the embodiment of the campaign on the American Music Awards red carpet.

Find out everything you need to know about Lady Gaga's Versace campaign — and see all of the images — here.

On Facebook, Versace said "the campaign shows how Lady Gaga completely captures the Versace essence: creative, experimental, fearless." It also shows how much Gaga can look like the house's creative director, Donatella. While the singer appears as herself in the campaign, she embodies everything from the legendary designer's poker straight blonde hair to her steely gaze. We can only imagine they listened to the singer's new track "Donatella" while the cameras clicked. 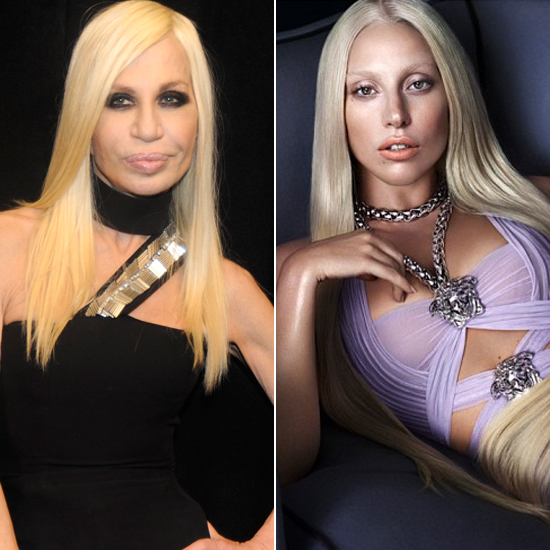 The artist herself referenced the song's lyrics when she tweeted about it Saturday night. "What do you wanna wear this Spring?" she asked her followers.

I'm so happy to be working w/ @Versace for the new Campaign! What do you wanna wear this Spring? #Donatella #famiglia pic.twitter.com/pOczenbp3e

Gaga certainly isn't the only star who's appeared in a campaign for the Italian fashion house. January Jones, Madonna, and Jennifer Lopez, among others, have also starred in the brand's ads. Tell us what you think of Gaga's first shot in the comments, and stay tuned for more images from her Versace campaign.