If you love to hear about the weird and wonderful side of fashion then you'll be excited for this read. Karl Lagerfeld's ex-assistant Arnaud Maillard has penned a book which reveals the side of Karl that we don't usually see. Ironically titled Merci Karl, it intends to reveal “a different side” of Chanel's creative director. It includes details about how he “needs an eternity to get ready in the morning,” and is an “unbelievable narcissist” who "takes photos of himself at every photo shoot and puts them everywhere." Some of the details which have been released are not that surprising to those already familiar with his behaviour. For example, he is very fickle which he has confessed himself and he can suddenly stop acknowledging a person. 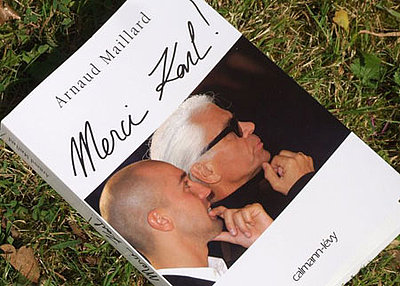 Karl has unsuccessfully tried to block the publishing of this (he tried a similar stunt with The Beautiful Fall) but it has already been released in France with a German publication planned too. There are no details of an English translation just yet, but here's hoping! Are you excited for this publication?

British Celebrities
On Our Radar: Mae Muller Wants It All, and We Can't Wait to See Her Get It
by Navi Ahluwalia 3 weeks ago