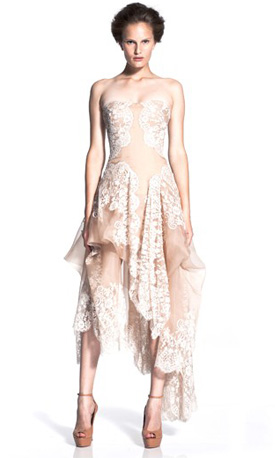 Sarah Burton was thrust in to the limelight earlier this year as she became the creative director of Alexander McQueen following his untimely death in February. Sarah has long been a part of the McQueen team (she officially joined in 1997) and having spent so long working with Lee, she is surely the best woman for the job.

Today, she has been talking to WWD about the future of the label and her plans for her first major collection to be shown in Paris on 5th October. Sarah commented, "I don’t think it has to have as much angst in it. I think it will become softer. There will always be this McQueen spirit and essence. But, of course, I’m a woman so maybe more from a woman’s point of view."

She talks about the dramatic presentation of Lee's shows, but explained that we shouldn't expect the same from her. "That was very much Lee’s territory — the spectacular show. In that way, I can’t try and pretend to be Lee." Sarah also added,


“What saddens me in a way is that Lee had these incredible shows, but always under that there were amazing pieces you could wear, but somehow nobody every believed it was wearable. There’s this myth that it’s an unwearable house, but that’s not true.”

Sarah is under a lot of pressure for the collection. It is her first solo McQueen show, although she has already produced a Cruise line. Are you excited to see the Spring show?