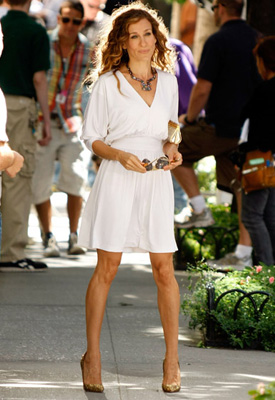 There has been a lot of talk this week about Sarah Jessica Parker's possible new position within a fashion house. Yesterday, it was reported that she had a role within the brand, but it wasn't clear whether she was merely shooting an ad campaign.

This morning, it has been confirmed that SJP has landed an active design role within Halston Heritage. The company is yet to release any more details, but is expected to include an equity stake within Halston.

It is currently a time of change at the brand. Since it's relaunch a few years ago, it has been under the charge of Marco Zanini, but London based designer Marios Schwab is about to present his first collection for the house. Parker isn't expected to be working directly with Schwab.

HBO Max
We Swear on Chanel, a Sex and the City Revival Is Coming Soon — Watch the Teaser
by Karenna Meredith 6 days ago