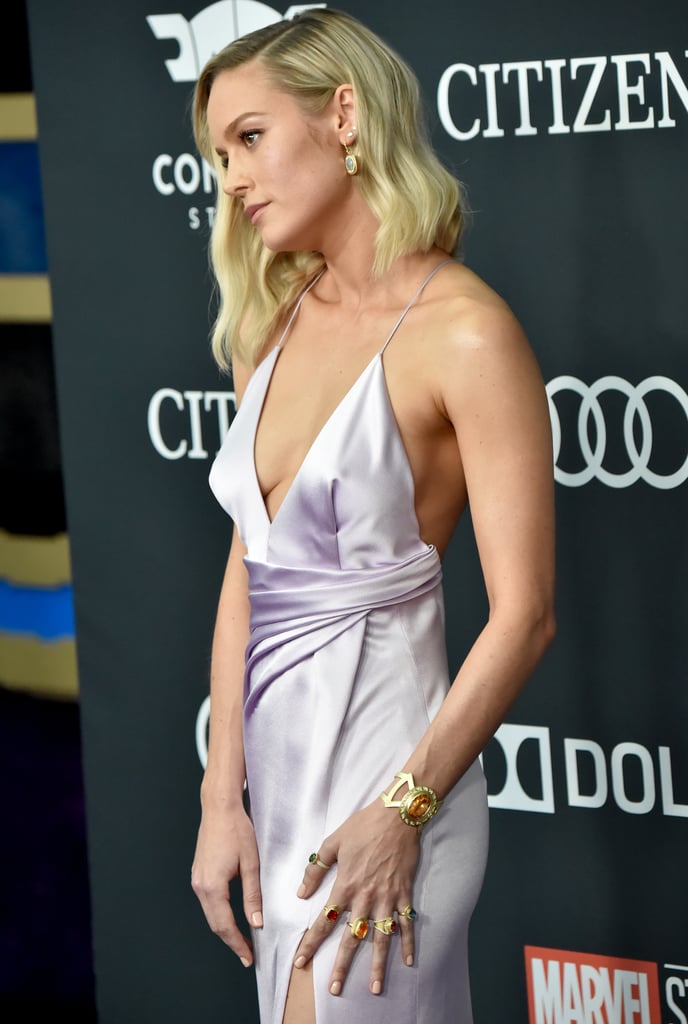 The wait for Avengers: Endgame is almost over, and in the run up to the movie's release, its stars have been pulling out all the stops when it comes to their wardrobes. At the movie's LA premiere on Monday night, there was definitely no shortage of must-see fashion on display, but our eyes were particularly drawn to some gloriously geeky jewellery choices. Brie Larson, who's been carefully picking Captain Marvel-inspired looks throughout the press tour accessorised her slinky Celine gown with a handful of multicoloured rings and a cuff by Irene Neuwirth, and it didn't take a genius to work out the inspiration: the stones in Brie's jewels matched the movie's infinity stones, and together her jewels were a high-fashion version of Thanos's infinity gauntlet.

Related:
Scarlett Johansson's Sliced-Open Suit Is Sexier Than Any Minidress We've Ever Seen

But Brie and her stylist weren't the only ones with this idea. Scarlett Johansson also gave this look a spin, and her hand candy was even more intricate. She sported a custom-made design, which linked her coloured rings to a larger stone on the back of the hand using chains and continued up to a gold cuff around her wrist. Just like Brie's, the colour of the rings matched the infinity stones in the Marvel comics and movies: the mind stone (yellow), the soul stone (orange), the reality stone (red), the space stone (blue), the power stone (purple), and the time stone (green). Scarlett's Sonia Boyajian design was apparently a gift from her boyfriend Colin Jost, who came up with the idea months before the premiere. Keep reading to see both amazing looks from all angles, Brie in Celine and Scarlett in Versace.