One of the biggest fashion events of the year happened in May when the highly anticipated Sex and the City Movie was released and premiered here in London! Our favourite New York gals headed in to town and hit the red carpet in their best frocks which did not disappoint. They were joined by a whole host of British celebrities including model Daisy Lowe as well as British designer (who created the wedding dress) Vivienne Westwood. 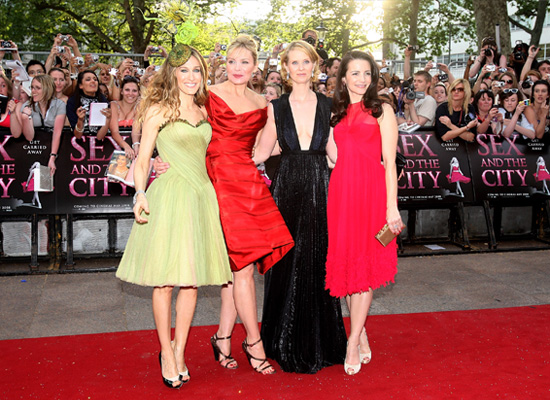 Fashionista's flocked to see the film which was almost more about the clothes than the characters as we swooned at that Alexander McQueen dress, the Proenza Schouler skirt and the amazing studded vintage belt. Carrie tried on countless wedding dresses with my personal favourite being a pearl applique Christian LaCroix style.

Many ladies got dressed up donning their best Manolo Blahniks to pay homage to Patricia Field's unique styling ways. Also, it was one of the few occasions when the cinema was predominantly women! Did you go see the movie? How was your cinema experience?