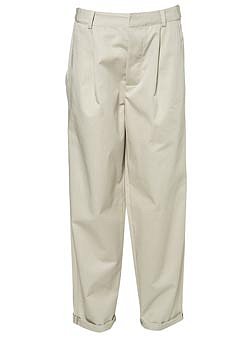 Wearing jeans all the time is becoming too easy. It's important for fashion to stay interesting so when considering buying another pair of jeans why don't you consider chinos instead? They're popping up all over the fashion radar at the moment following their appearance on the catwalks at Chloe and Michael Kors. But what does 'chino' actually mean?


A durable cotton twill that is woven in several weights and can be finished with a smooth, mercerized or soft, brushed surface. Originally used for summer uniforms by the US Army during their defense of the Chinese in the 1900 Boxer Rebellion, chino gained popularity after WWII, especially for the trouser referred to as chinos, which college men who returned from the war wore to class. Interestingly, the term chino is actually a misnomer. When the twill was shipped to the army, it arrived in freight boxes stamped with the country of origin; however, the imprint read “Chino” rather than “China,” and the name stuck.

See below for some items currently available!