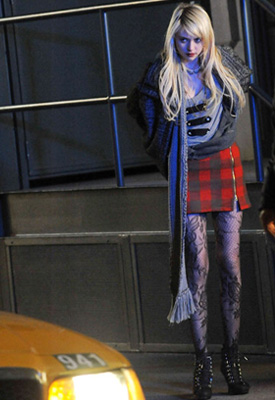 Rumours are swirling about the next face of New Look. The store has previously enlisted Pixie Geldof, Alexa Chung and Kimberly Walsh to front it's campaigns, but could the new face be Gossip Girl Taylor Momsen? Taylor has become famous for her grungey styling and at 16 is already signed to a model agency.

Rumours began across the pond where Nylon reported that she was busy shooting a major ad campaign. It's yet to be confirmed, but I think that her young individual style would be perfect for the High Street store. Do you think that Taylor should be the next face of New Look?