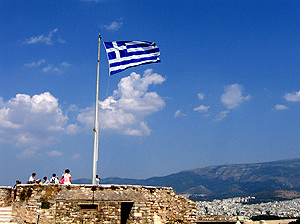 Shopping for designer goods is no longer limited to New York, London, Paris and Milan, quite the opposite in fact. People all over the globe want to get their hands on designer items which is why this Top Ten might surprise you slightly. As part of its recent Global Designer Brand Survey, The Nielsen Company asked 25,000 consumers in 48 countries if they bought designer brands when they shop. The term 'designer' was not explained nor specified and no price point was mentioned. Make a note of these new shopping districts on your fashion map as designer boutiques are sure to be popping up there soon!

To see the rest of the list read more

Grecian style is often referenced on the catwalk, so perhaps Greece being head of the list is not a great surprise. In Athens, shops near Kolonaki Square house both international and Greek designers. Hong Kong is quickly becoming a fashion hotspot as design houses such as Coach plan major flagship stores there. The same applies to India where just last week it was announced Stella McCartney plans to open six new stores over the next two years.

Hungary might not be so interested in high fashion but labels such as Diesel and Calvin Klein are big news there with giant sized malls appearing in Budapest. With Abu Dhabi currently being touted as the richest city in the world, the United Emirates are no stranger to luxury. There are also rumours of the first overseas Bloomingdales appearing in Dubai soon.
Read the full report here at WWD.
Source