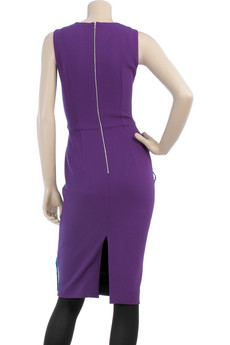 Exposed zips have been on the catwalks for a few seasons. They originally appeared at Lanvin as Alber Elbaz created beautifully feminine dresses where your attention was seductively drawn to the thick visible zip at the back.

Initially there was some confusion, as though the dress was not quite finished, but then they began to emerge all over the fashion spectrum and a trend was born.

Zips appear on both the front and back of garments to become a feature of the item rather than simply a function. In Topshop this season you will struggle to find a dress with a hidden zip as it quickly becomes the focal point of dresses, skirts and tops.

It definitely gives items a punky edge and with all the tartan around next season your wardrobe is sure to feel very '70s very soon...