Earlier today I broke the sad news that fashion had lost one of its best loved names. Alexander McQueen has apparantly committed suicide at his home, and while more details emerge, tributes have been appearing on Twitter.

The British designer was born Lee Alexander McQueen in East London and began his fashion career on Saville Row. He later completed an MA at Central Saint Martins and his graduate collection was famously bought up by Isabella Blow. He won British designer of the year four times between 1996 and 2003. He was the youngest designer to ever receive that accolade. 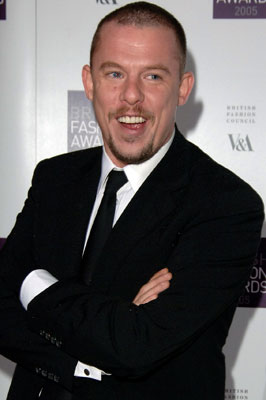 Daisy Lowe commented, "Wow that's a huge loss for the creative world," while Brix Smith Start is "stunned" and commented, "Poor man what a loss of talent!" Dita von Teese also made a brief comment on her Twitter simply stating, "Rest in Peace Mr. McQueen". Fellow designer Rachel Roy said, "My prayers are with A. McQueen's family and loved ones — a loss for the entire world on so many levels."

His most recent collection for Spring 2010 was inspired by his love of diving. He streamed the show live on ShowStudio and also showed off his commercial awareness by including the first play of Lady Gaga's new single. The Spring line included those by now infamous armadillo shoes which did not go in to production, but have been worn by Daphne Guinness amongst others.

British Vogue editor Alexandra Shulman has released a statement saying, "Lee McQueen influenced a whole generation of designers. His brilliant imagination knew no bounds as he conjured up collection after collection of extraordinary designs. His death is the hugest loss for anybody that knew him and for many that didn't."