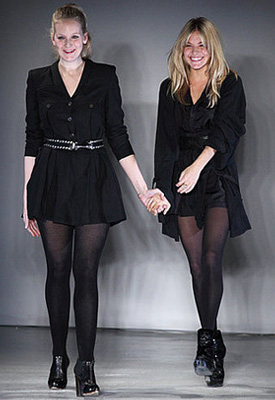 Late last year Twenty8Twelve announced plans to show at London Fashion Week. Their show in February went on to be well received with a star studded front row. No surprise then that today they revealed they will show again next season, in September.

The two Miller sisters have not begun work on their Spring 2010 collection just yet, but they will be working with shoe designer Georgina Goodman again who created their shoes for Autumn '09.

Earlier this week Sienna attended an awards party doing a spot of self promotion in a Twenty8Twelve zip jacket. I can't wait to see what they come up with for next Spring/Summer! Let's hope they don't upset the locals this time.