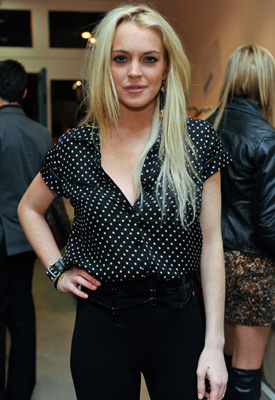 Lindsay Lohan's career at Ungaro got off to a rocky start when her first catwalk collection received bad reviews. Emanuel Ungaro himself even spoke out against the celebrity designer saying the "collaboration was a disaster". The fashion world was in shock yesterday when Lindsay was confirmed to be remaining as the artistic advisor.

The CEO of Ungaro Mounir Moufarrige has since defended his decision explaining, "Fashion is controversial, and you need some novelties and you need to test some new ideas," adding that he is happy with his "walking, talking advertisement".

Although sales have been slow and both Net-a-Porter and Neiman Marcus have dropped the label for the Spring season, Moufarrige is not phased. He said, "There is more buzz definitely but we are in a recession. The criticism was harsh. I am sure we can do better in the collection to be honest but I think it was harsh." Do you think the criticism was unfair and that Lindsay should be allowed a second chance?