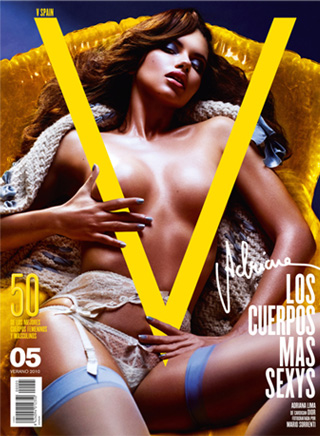 V Magazine is increasing it's empire this month as it launches its first international issue in Spain. The style magazine has chosen Adriana Lima to grace one of the covers of the issue entitled, 'The Sexy Body Issue'. It will be available on newsstands in Spanish speaking countries including Spain, Puerto Rico, Argentina, and Mexico.

There are limited editions versions of the cover starring Lily Donaldson, Isabeli Fontana and Eniko Mihalki. The cover was shot by Mario Sorrenti and styled by Andrew Richardson. See below for a short video of highlights from the issue.

To watch the video, which may not be suitable for work, just read more.