This morning I was lucky enough to be one of the first people to check out the new supersize shopping mall in West London. Westfield London has taken over ten years of planning (and a credit crunch defying £1.7 billion) but it was finally unveiled to the public this morning as it was officially opened by London Mayor Boris Johnson. 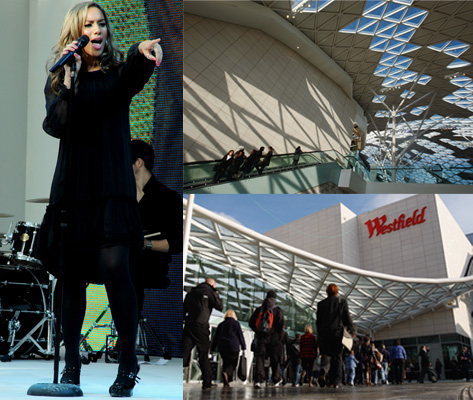 A fashion show presenting looks available at the mall starring the gorgeous Erin O'Connor (modeling Marks & Spencer of course) followed the grand opening before Leona Lewis took to the stage. Leona looked gorgeous in a black sheer dress as she belted out a couple of songs starting with the unbelievably catchy Better in Time.

Firstly, this might be obvious seeing as it houses a staggering 265 shops and nearly 50 food places but this mall is huge. It is almost overwhelmingly big although I'm sure in time when you have gained your bearings it becomes more managable. There are five anchor stores; House of Fraser, Next, Debenhams, Marks & Spencer and Waitrose and these help you to navigate your way around.

The shops come from 15 different countries and 80% of them are fashion specialists. The mall is divided in to key sections defined as; luxury, aspirational, urban chic, streetwear, kids and High Street. I was most intrigued by The Village which is dedicated to luxury retailers and designers. Disappointingly, many of these boutiques like Louis Vuitton, Dior and Miu Miu are not yet open but the soft leather sofas and the chandelier lights create the perfect atmosphere for high end shopping.

The public transport links to the mall are impressive with three tube stations near-by and one overground rail station not to mention countless buses. However, despite this I'm not convinced that people will travel from Oxford Street to shop there.

England is famous for it's rain and cold weather so a great place to shop under a roof is obviously appealing. I also don't think it will ever be quiet, particularly not in the run up til Christmas. There was so much going on today from Leona singing to live lingerie models at La Senza to Twiggy opening the new M&S that I couldn't possibly have taken it all in. Looks like I'm going to have to pay another visit! Check out a full list of stores here.