I only wear high heels. Sure, I put on trainer when I hit the gym, and I have a lone pair of jelly sandals I reserve for trips to the beach or a pool. But in day-to-day life, you'll find me exclusively in heels — three inches or higher, thank you. 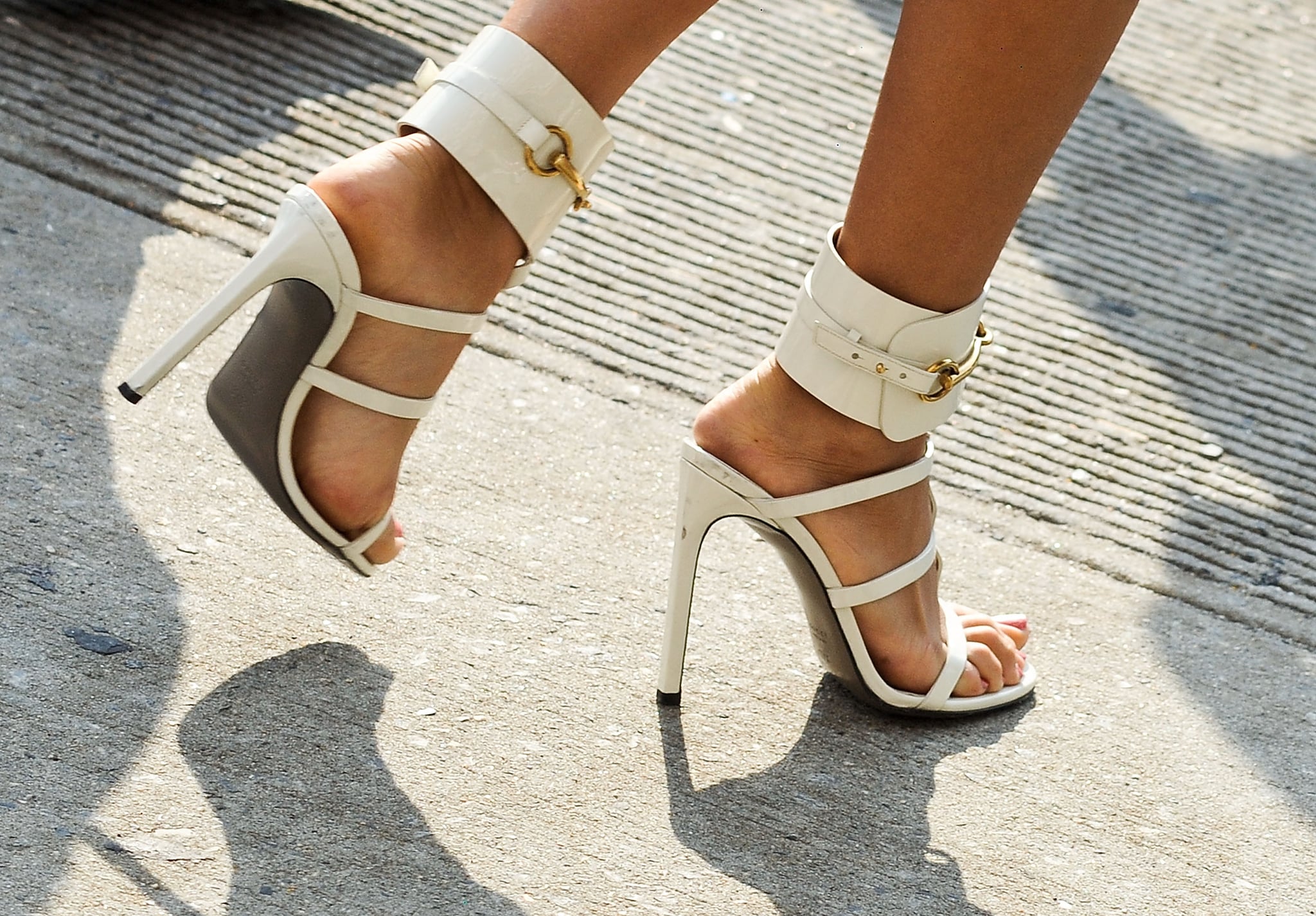 It might sound insane when I tell you that I liken my decision to wear high heels to my decision, at age 15, to take up bass guitar— but hear me out. When I decided to play bass, I was inspired by punk-rock riot girls like the shrieking and ponytailed lead singer of Bikini Kill, Kathleen Hanna. I admired women who wore babydoll dresses, who were girlie and aggressive, lipsticked and loud. Bass was strong and noisy and not easy to play; I was proud when people were impressed by the way I could juggle a song's rhythm while singing.

For me, heels feel noisy and powerful like a bass riff, so much that I forget they're often viewed as a symbol of feminine frailty. Personally, I feel more assertive and more womanly with a pair of heels on. I'm only 5'4", so those extra inches elevate me to eye level with the rest of the world and help me take up more space — a trait that is not traditionally "feminine" — both of which give me a jolt of confidence. People hear me coming as my heels stomp against the ground; I don't own any shoes I couldn't run in if need be; and, if we're honest, a swift kick to the groin will do a lot more damage when inflicted by a pair of Louboutins than Nike Free Runs.

I'm sometimes asked whether this habit is painful. It's not. I have a low tolerance for discomfort: I don't wear shoes that pinch or hurt or rub my feet, and I'm an expert at predicting whether they'll do so with one short strut across a boutique floor. I also live in LA, so my geographical location helps; I don't do anywhere near the amount of pavement pounding as my friends in cities like New York or San Francisco.

That's not to say I haven't felt inner conflict about my preference for a towering stiletto or height-amplifying wedge over the years. Can I really remain fit and healthy and pain-free after years tromping around in heels? And is it disingenuous to tell myself that wearing high heels can be a feminist statement in its own right?

I decided to get the first question out of the way. I got podiatrist Dr. Ami Sheth on the phone and asked her to give me the laundry list of all the potential ill effects of wearing high heels. There were the ones I'd heard of, like hammer toes, bunions, and Achilles tendonitis — none of which I have, at least not yet. Then there were the unfamiliar ones, which sounded pretty scary: neuromas (pinched nerves or tumours of the nerves) and metatarsalgia (pain and inflammation in the ball of the foot.)

Dr. Sheth did admit that the worst high-heel-related problems she's treated usually occurred in elderly women, who, in the golden era of the glamorous '50s housewife, even wore their stilettos while cooking in the kitchen. She also said that all heels are not created equal. "When you're wearing a stiletto, you're just putting pressure on the ball of the foot and the skinny little peg on the heel," she explained. "Wearing a wedge is a lot healthier for you, because the pitch — the angle of the shoe — is a lot lower."

So, I asked her: will wearing heels so often make my feet fall off? I do yoga, after all. Dr. Sheth said probably not, though she qualified her recommendations by telling me she'd really need to examine my feet to make any official diagnosis. She also advised broadening my shoe wardrobe. "I do like heels, so I'm not going to be the type to tell you don't do it. But do it smart," Dr. Sheth recommended. "When you're going to Costco, maybe forego the wedge sneakers." Naturally, I chose to accept anything Dr. Sheth said that reinforced my lifestyle choices and ignore any warnings to the contrary, as one should do with all sound medical advice. (I also don't have a Costco card, so that particular suggestion obviously did not apply to me.)

With my anxiety about my future foot health relatively alleviated, let's tackle what, for me, has been an even stickier issue: the idea that there's something privileged, and thus distinctly antifeminist, in rocking heels. I once got in a tangled argument with a gender studies professor in college, who told me that heels were nothing more than an ostentatious display of socioeconomic standing. Look at me! she claimed they advertised. I sit all day at a cushy desk job and am not required to do physical labour.

Look, I have no problem overanalysing things — I was a gender studies minor, for god's sake — but I bristled at that notion just as much as her suggestion that hiring a housecleaner implied that you, yourself, had something inherently better to do with your time. I asked: who's to say teaching a gender studies class is somehow more noble or meaningful than cleaning a house? I think plenty of people would argue the opposite. (She wasn't amused.) Inspired, I did some research and discovered that some historians think high-heeled shoes rose to prominence in the 16th century, when Peruvian horseback riders used them to keep feet in stirrups. Sounded pretty practical — and badass — to me.

The author Chimamanda Ngozi Adichie is no stranger to the conflict modern women are still made to feel between indulging their love for fashion and being taken seriously as intelligent beings. In a recent essay for Elle, she wrote about years spent hiding her beloved high heels in an effort not to seem too "female," afraid they would impede her ability to be accepted as serious, as worthy of a place in the writing world. After a friend told her to break out the heels, that it was her work that mattered and not what she chose to wear, she relented and hasn't looked back. "I feel again like myself," she wrote, "an idea that is no less true for being a bit hackneyed."

So, no, I don't see myself giving into the floor-hugging allure of a gladiator sandal or studded brogue anytime soon. (Sorry, Dr. Sheth.) I want to feel like myself, and I feel like myself with my heels a few inches off the ground. Maybe there's just something about the sharp, familiar thump of a heel against concrete that reminds me of my bass-playing days, or maybe it's the joy in discovering that there's no conflict in being both tough and feminine, that they've been in perfect harmony all along.

Celebrity Style
The Designer of Beyoncé's Sustainable Mesh Minidress Is Thrilled: "The Day Has Finally Come!"
by Sarah Wasilak 20 hours ago