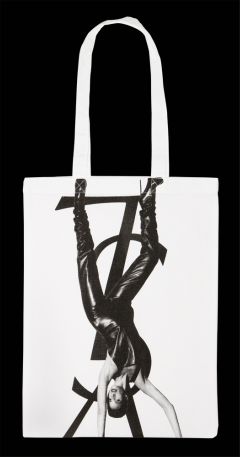 The international fashion weeks kick off very soon as New York plays host to Spring 2010 shows from 10th September. London will quickly follow suit as the 25th celebrations kick off across the capital, and there might be more than just fashion shows to look forward to.

In September, Yves Saint Laurent will release the fifth edition of the company's manifesto at key fashion capitals around the globe. The 32-page promotional publication (which mainly includes the Autumn campaign) will be handed out in Paris, Milan, London, Tokyo, Hong Kong and Seoul.

If you're one of the first 2,000 recipients in each city you will also get this funky tote designed by Stefano Pilati featuring a leather clad Christy Turlington! Christy is the face of this Autumn's ad campaign where she was shot by Inez van Lamsweerde and Vinoodh Matadin.

The bag and the manifesto will be distributed on 12th September. Although the exact location is yet to be announced, I would expect to find people around Piccadilly Circus, Bond Street and Oxford Circus. Will you be trying to get your hands on this cool tote?