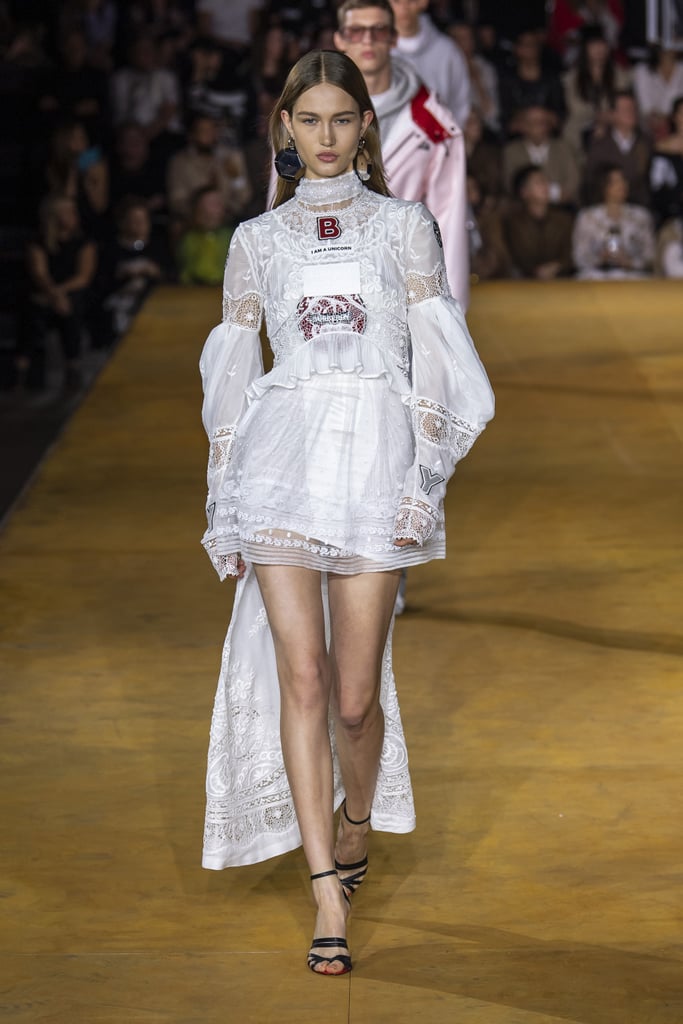 Riccardo Tisci continued to put his own unique spin on Burberry during the Spring 2020 show, but this time around, in contrast to last season's '90s rave-inspired collection, the show had a more airy feel, and even a touch of Victorian romance. The show was entitled "Evolution" and did indeed seem to represent the designer finding his footing when it comes to managing the expectations of the heritage consumer with his own modern approach to fashion. Beige separates with all the classic Burberry trademarks opened the show (those ubiquitous trench coats, midi skirts, and shirts with logo-emblazoned collars) before segueing into a sequence of more experimental styles, tinged with aviation-inspired touches like clip fastening, bodysuits with the poppers left open, and parachute coats, almost exclusively in cream, black, and white, dotted with the occasional red gingham. They were topped with baseball caps with bonnet-like brims, or even, in one case, a crystal-studded veil.

For Tisci's fans who prefer a more glamorous look (Kim Kardashian, we're looking at you) there were crystal-encrusted suits, sparkling sheer dresses with visible labels on the chest (a knowing nod to the logomania trend) and lacy, Victorian confections which matched the men's basketball shorts with lacy trims. The finale dresses, dusted with ostrich feathers offered a final dose of red carpet glamour. See it all for yourself ahead.

Autumn Fashion 2021
Pantone's Post-Lockdown Colour Predictions Say It Loud and Clear: We All Need a Holiday
by Kiera Spronk 3 weeks ago