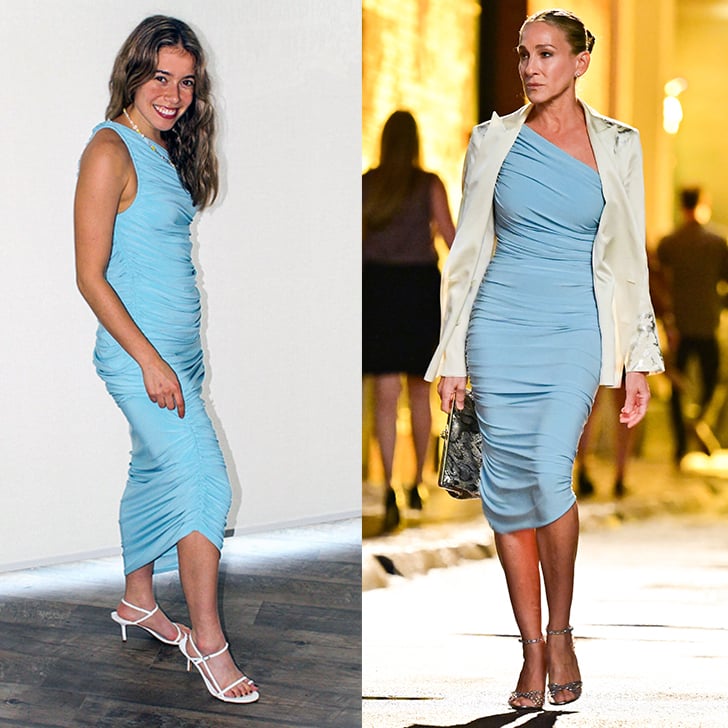 Trying On the New "Carrie Dress" For Size, Sex Appeal, and Comfort

And Just Like That costume designers Molly Rogers and Danny Santiago needed six samples of the blue Norma Kamali dress Carrie Bradshaw (Sarah Jessica Parker) wears in episode seven of the HBO Max hit series. It's the look she chooses for her first foray back into the dating world (don't pretend you weren't wondering what she'd wear . . . ), and it's not a bad choice. It's formfitting, it works as a great piece to layer with, and it's effortlessly sexy when teamed with a silver-foiled Max Mara blazer, Aquazzura jewel-strap heels, and Paco Rabanne snake-effect metal clutch.

Wearing a "Carrie outfit" at any age emits that distinctive brand of mystique her character has become known for.

"She really knew how to work the dress down that alleyway. The picture of that with the gold light behind her — it's a cover! It's quintessential Carrie," Rogers gushed to me over the phone. "It's very editorial," Santiago agreed during our conversation. And it is . . . until she throws up all over it. After a few too many drinks with her new love interest Peter (played by Jon Tenney), it soon becomes clear why the wardrobe team needed several extra samples for filming takes. "OK, who's got six of the same dress after a pandemic?" Rogers laughed about the "stunt" they dressed Parker for in this scene. Media outlets took note of paparazzi photos on set prior to the show's premiere, and overnight, the eye-catching blue number was seemingly dubbed the "new Carrie dress." Since it retails at the relatively accessible price point of $205 and also comes in a multitude of colours (FYI: Rogers originally tried to source it for Carrie in pink), I had to try it out.

Renowned designer Norma Kamali explained that the Diana silhouette in question hails from the '70s and has since been updated with a built-in bodysuit for flatter and function. She particularly likes it on Parker because of how it moves on her body. "[Parker] continues to exemplify that it is possible to be fit at any age. She is proving just that by wearing it, she is timeless no matter her age," Kamali told me, confirming that the response to her brand and the ever-popular Diana (also recently worn by Miley Cyrus on SNL) has been great.

Kamali's own favourite way to style it is with flat sandals or heavy lug boots. However, when she sent me one of my own, I took a tip from Carrie and opted for sandals, especially since, at 5'1", the dress fit me a little long. Parker had the same issue. "The minute SJ tried it on in her dressing room in between scenes, she was like, 'This is going to totally work, I just want it a little shorter.' And that was it. When I saw it on her, I thought, everyone's going to compare this to that brownish T-shirt dress she wears with sunglasses on the street. It was so body-conscious, and you could really see her toned body in it. I just knew people were going to make that correlation," Rogers said, referring to the hot little mini from Sex and the City season two episode 15, when Carrie goes on a date with Vaughn Wysel (Justin Theroux). 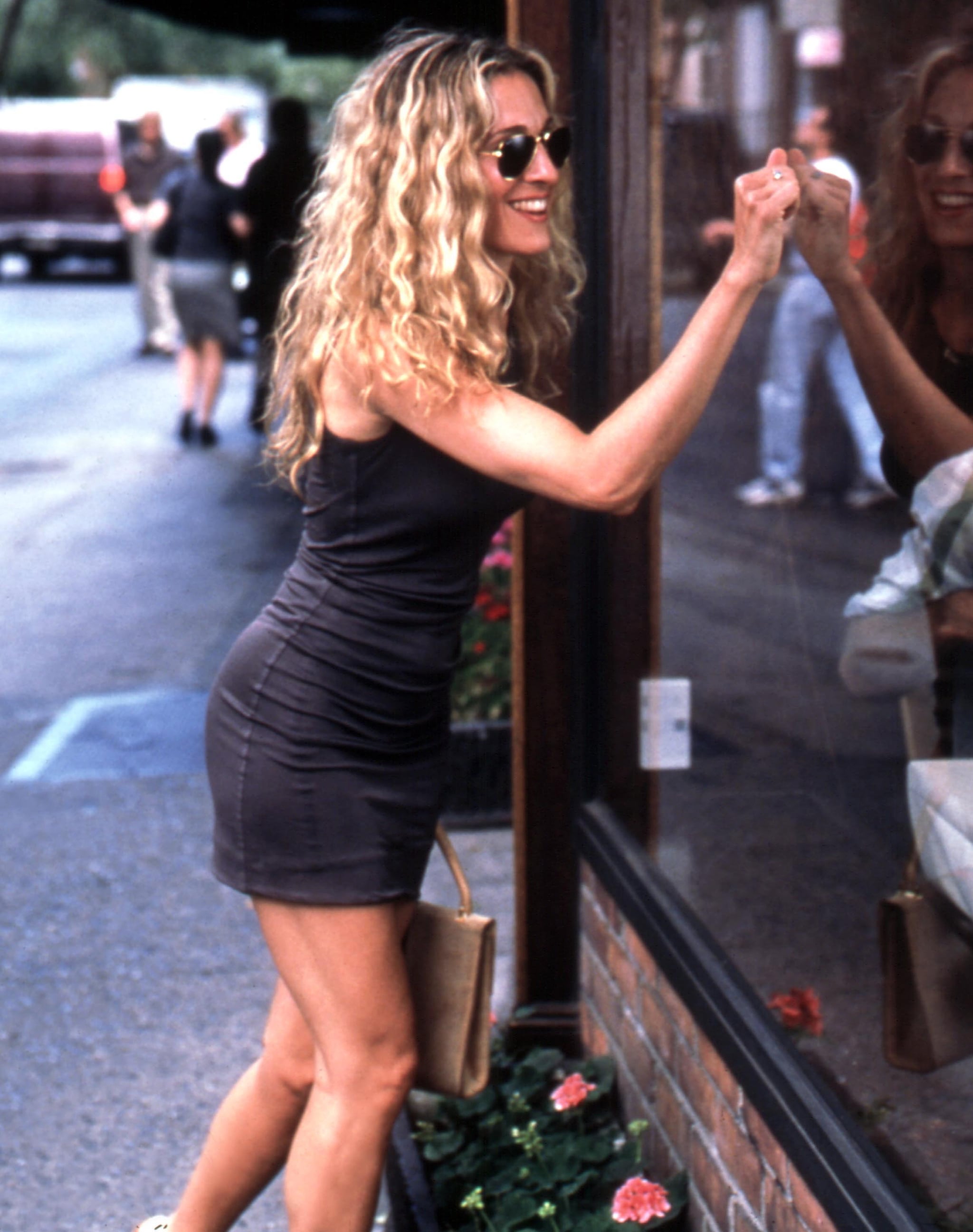 While its figure-enhancing quality could be one reason everyone's so hyped about the design, having worn it myself, I think there's also something to be said about its versatility and comfort. Thanks to the dress's four-way stretch poly-lycra bodysuit, I could dance the night away at a wedding without having to worry about adjusting the neckline, snapping an all-too-thin strap, or feeling restricted. The shirred sides create a fluid, lengthening look for your frame, so even if you shorten it like Carrie did, it will still flow seamlessly with a blazer — or, as Santiago prefers to call it, the soft-slouch jacket. "We've been using this look a lot for the show, which, for us, is like the way you'd wear a jean jacket. It's something you throw on over everything. It always looks great and elegant. But sometimes you need an extra layer if you're in New York City, depending on where you're going. You go outside and it's a little bit cooler," he explained. I tried it on with a few of my coats — ranging from casual to fancy, fitted to oversized — and liked it just as much.

While Kamali has transformed the Diana throughout the years, experimenting with different heights, finishes, and colorways (some variations exclusive to certain retailers), it always comes with a budget-friendly tag and in sizes ranging from XXS to XL. I'd argue that it now also offers a dose of Carrie's confidence, and Rogers agrees. "I feel like people responded to that blue dress like they did to the custom Missoni in the closet scene when she gets back into heels. Because she shows her body so much in those two silhouettes, people really think to themselves, Ooh, Carrie is going out," she said, humming with excitement. After all, wearing a "Carrie outfit" at any age emits that distinctive brand of mystique her character has become known for. Even after getting sick and suffering a wardrobe mishap in the dress, you bet Carrie gets a second date.

Ahead, scroll to shop the "New Carrie," aka Norma Kamali's Diana, in some of my favourite shades.