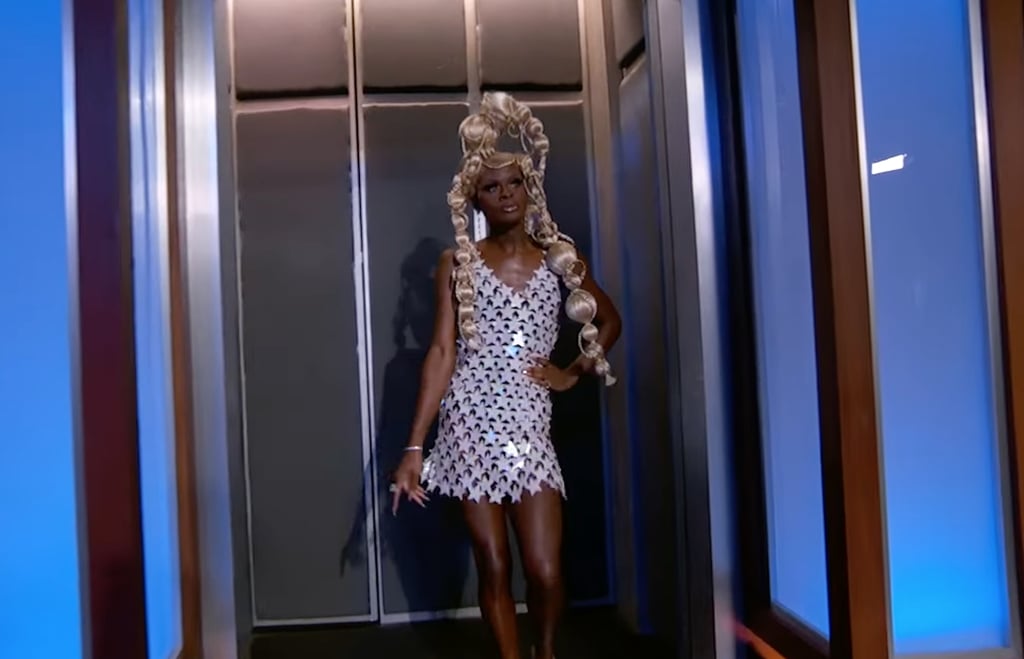 America's Drag Superstar Symone, who won RuPaul's Drag Race season 13, visited guest host RuPaul on Jimmy Kimmel Live to talk about building her empire. As soon as she walked in wearing this Paco Rabanne minidress, constructed from glossy, iridescent stars connected solely by metal rings, we could look absolutely nowhere else. The incredible number comes from a fashion house known for its chainmail designs, and Symone did this one justice with styling help from Marko Monroe, who completed the look with Sophia Webster platforms and Shay Jewellery (make sure you catch those drop earrings!).

When RuPaul asked Symone how she's going to continue to rep The House of Avalon as The Ebony Enchantress, she immediately responded, "Well, one, I'm going to keep looking like this," confirming she was just as into this fashion moment as we were. Although, Symone has plenty more to be proud of, like her fierce Interview cover, the upcoming Smooth Taste Tour, and an impressive list of celebrity fans that includes Rihanna and Ariana Grande.

We'll be dreaming of Symone's latest talk show mini for as long as she keeps covering billboards and magazines — or "what drag queens don't traditionally do," as she told RuPaul. But from where we're standing, the talented and charismatic Symone, who is the third drag queen to be interviewed in late-night history, is going to shine far beyond those expectations. Here's hoping she continues to work with Monroe, so they can collaborate on more looks for us to swoon over in the future.

Celebrity Style
Dua Lipa's Sheer "Fendace" Dress Is Sexy From the Front, the Back, and Even the Side
by Yerin Kim 17 hours ago