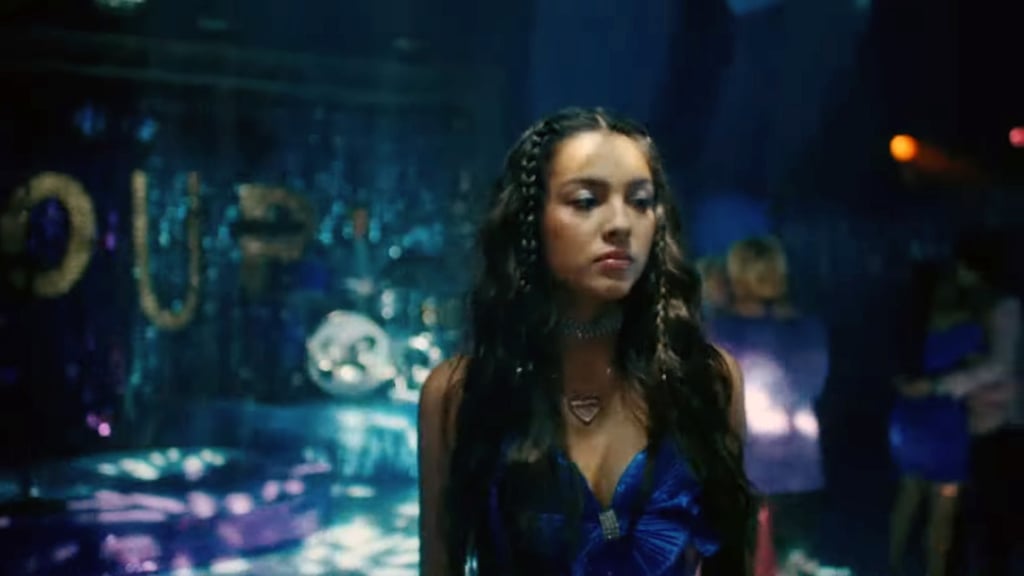 Olivia Rodrigo's Sour Prom, which streamed live for fans on June 29, is getting lots of buzz. Sure, there's the Courtney Love drama, in which Olivia was accused of taking direct inspiration from Hole's 1994 album Live Through This, but Rodrigo pretty much put that theory to rest by revealing her own mood board. Fans will also peer beyond the pink beaded slip Olivia wore to promote her concert and take in the look she rocks for the main event: a blue metallic '80s-esque minidress with pleated tiers and a large bow, plus fishnet tights and combat boots — aka the essentials.

Rodrigo posted a photo of her mom in a similar outfit on her Instagram Stories right after the film's release, which you can see ahead. "also after filming SOUR prom I found out my mom wore this dress to her prom in the 80s and rode there in a white limo. life is crazy lol I love her," she wrote. Even though this is a coincidence Olivia didn't see coming, one could still argue she was subconsciously influenced by her mother's taste when asked, "what do YOU want to wear to your first prom?" by stylists Chloe and Chenelle Delgadillo.

Click through for a couple more stills of how Olivia's prom dress turns out by the end of the night (sorry for the spoiler, but she throws an oversize rhinestone blazer on top), then check out some (mostly) vintage frocks we found if you can't help but want to channel Olivia Rodrigo — and her mom! — in a throwback style.