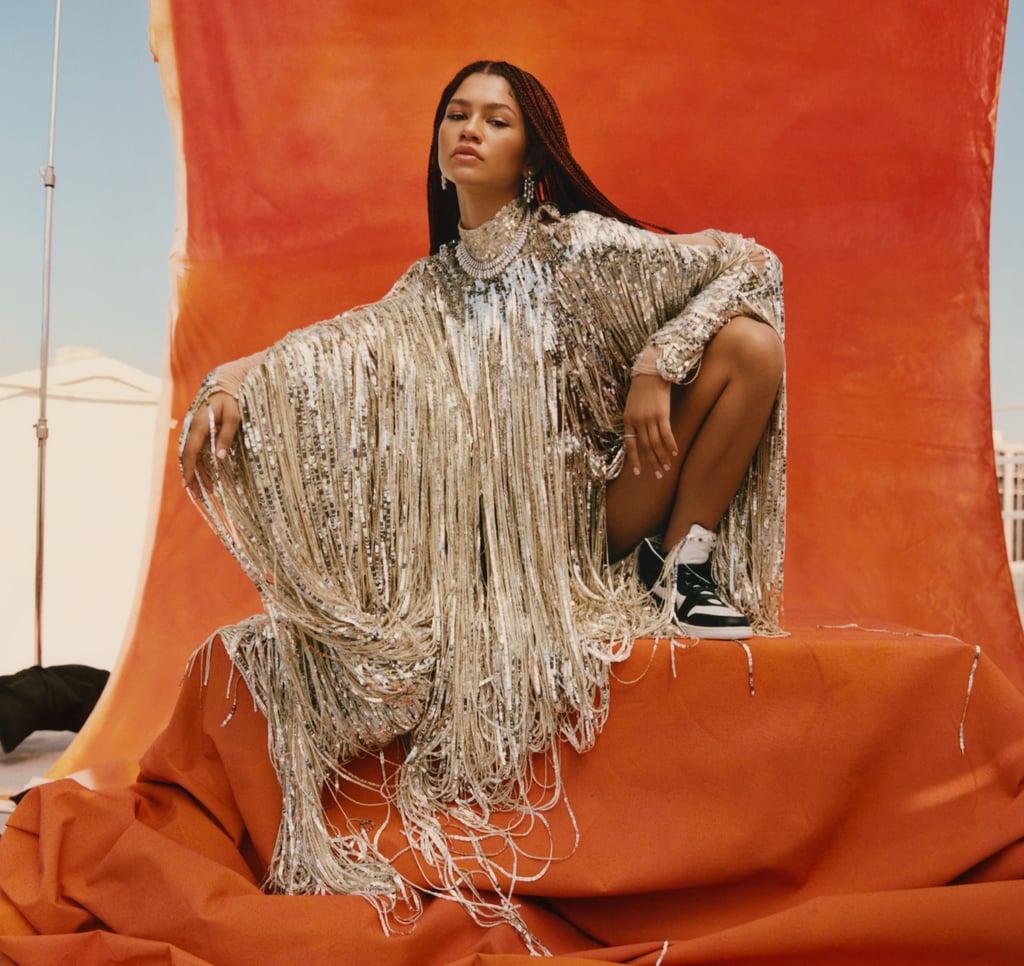 Zendaya's Stylist Law Roach Dressed Her For Another Magazine Cover: "I Get the Opportunity to Flex"

Zendaya stars on Elle magazine's December/January 2021 cover, for which she talked to her friend and Dune costar Timothée Chalamet about her incredible projects and achievements during her time in lockdown and her recent Emmy win for Euphoria. Zendaya kept it so real throughout the entire interview — as did stylist and Image Architect Law Roach, who accompanied her on set and dressed her in incredibly powerful looks consisting of couture gowns and sneakers. "It was inspired by fly Black girls that I know, since probably prom, who have taken their heels off and threw the sneakers on so they could have a good time and feel comfortable and fly all at the same time," Law told me over the phone the morning the new images were released.

True Zendaya fans may have noticed that Law has been styling Zendaya's editorials more and more. The fashion dream team brought her September 2020 InStyle cover shoot to life, and they recently worked on Vogue Hong Kong, where Law brought a more avant-garde approach to the scene, choosing a lime-green, sculptural Area dress with cutouts and crystals and a Christian Siriano floor-length gown that was essentially shaped like a chess piece.

"On set, of course I show [Zendaya] the clothes and she has her favourites, and we always make sure we lean into those."

"I think [working on Zendaya's magazine shoots] is allowing me to show my range when it comes to editorial. We just did Vogue Hong Kong, and this shoot was totally different from that. I would love to keep doing it, as long as the magazines keep offering me to do it. I think it's fun. I'm not an editorial stylist, so I get the opportunity to flex in that way, and I think it's really cool to see," Law told POPSUGAR.

After Law worked up his sneaker vision for this particular shoot, he sent his idea over to Elle Editor in Chief Nina Garcia, who naturally loved it and allowed him to "rock out" and create. But did Zendaya get a say in what she wore, and which was her favourite dress and sneakers combo? I just had to know.

"On set, of course I show [Zendaya] the clothes and she has her favourites, and we always make sure we lean into those. That's what's so great about our relationship — I work on the things I work on, and she gets on the clothes and gets in front of the camera doing these amazing kicks, like you see her do in the New Balance sneakers and Dior dress. We have this really amazing relationship where we both add equally to whatever it is that we're doing," Law said.

Scroll through to see the moment Law referred to — when Zendaya shows off her athletic prowess with a high kick in Jaden Smith's New Balance sneakers and a Dior gown — and check out the cover, where Zendaya poses in this sequinned Valentino Couture number that Law promised is harder to wear than it looks: "It's really, really long. But the way it fell on her just felt so easy — like she could almost be sitting on a stoop in Harlem on the steps of a brownstone. I'm so proud of it."