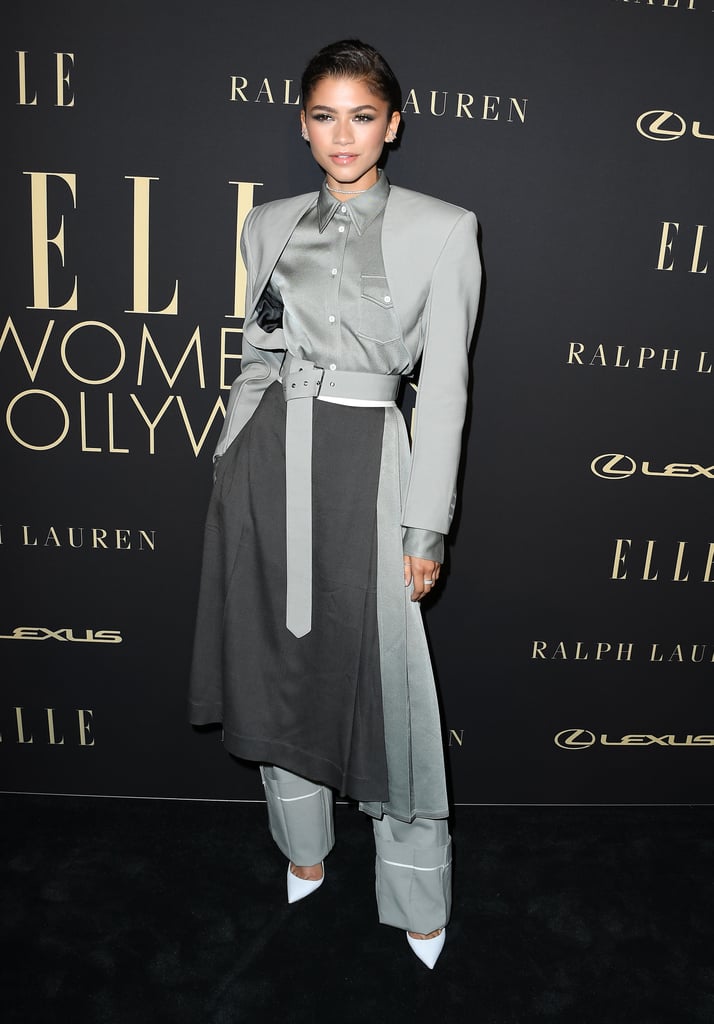 How to Wear Trousers Under Your Midi Skirt, as Demonstrated by Zendaya

Zendaya isn't quite done showing us how good she looks in a business suit. The Euphoria actress appeared at the Elle Women in Hollywood event on Monday night in Los Angeles, and she stepped out wearing a grey Peter Do suit from the designer's 2020 collection.

The suit featured an oversized blazer and trousers with a silk blouse. She added a bit of extra flair with a colourblock, pleated midi skirt that she threw over her trousers and finished things off with a wide grey belt, a pair of white pumps designed by Christian Louboutin, and jewellery by Yvan Tufenkjian, Djula, and Le Vian.

This obviously isn't the first time Zendaya has looked like a total boss in a trouser suit. Last month, the 23-year-old walked the red carpet at the Harper's Bazaar Icons party in a grey Berluti suit — you know, the same suit Michael B. Jordan wore to the Vanity Fair Oscars party months before. The Berluti ensemble featured a black floral printed suit that she wore with a silky button-up shirt and tie underneath. Days before that, she arrived at The Daily Front Row's seventh annual Fashion Media Awards in a burgundy velvet suit and matching cap worn with a red-and-white polka-dot blouse.

Read ahead to see more photos of Zendaya at Monday night's Elle Women in Hollywood event.

Related:
Zendaya Absolutely Slayed This Year's Fashion Game, and We Have All the Looks to Prove It
Previous Next Start Slideshow
Celebrity StyleBlack WomenWomen Of ColorDjulaLe VianSuitsZendayaSkirtsChristian LouboutinRed Carpet